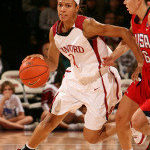 Rosalyn Gold-Onwude is a graduate of Stanford University, and a 4 year starting point guard on the Stanford Women’s basketball team. Ros was named all Pac 10 defensive player of the year in 2010, and was instrumental in helping Stanford win Four Pac 10 Tournament Championships, reach the NCAA Final Four 3 consecutive years, and reach two Final Four Championship games with the University of Tennessee, and the University of Connecticut.

Putting on a Game Face - Parents Too!